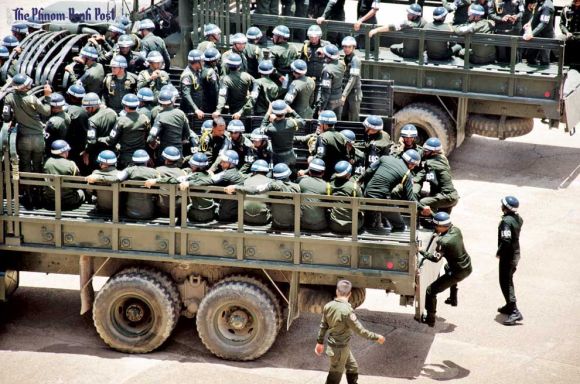 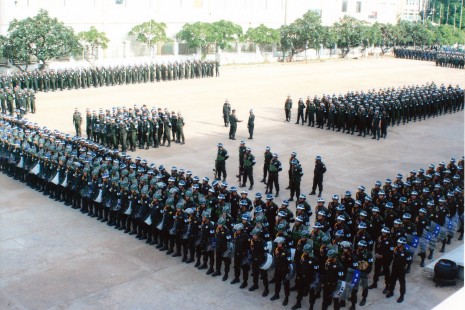 About 1,000 military police officers in riot gear were seen participating in drills outside the Olympic Stadium on Saturday morning as part of a training exercise that top officials have said was designed to prepare for mass demonstrations led by the opposition.

Armed with riot helmets, shields and batons, the officers formed neat lines next to rows of assault rifles before filing into the stadium for more than an hour during which intermittent speeches and vociferous group chanting could be heard.

Military equipment, including the weapons, were then packed away into a flat-bed truck as well as a military ambulance emblazoned with the names of its benefactors – Prime Minister Hun Sen and his wife, Cambodian Red Cross president Bun Rany.

The soldiers were then ferried away in a convoy of dozens of military police trucks.

Kheng Tito, spokesman for the National Military Police, confirmed yesterday that more than 1,000 officers had taken part in training exercises teaching them how to protect the country during a demonstration.

The exercise followed a flurry of recent army and military police movements in and around Phnom Penh that have led to rampant speculation the government is preparing to strongly crack down on any protest.

The government has maintained the opposition has the right to demonstrate. But violence will not be tolerated and CNRP leaders will be held to account for any public disorder.

“This is a preventative measure … so the military police can be prepared to crack down quickly if a demonstration turns into rioting, and to protect ordinary public activity,” Council of Ministers spokesman Phay Siphan said.

On Thursday, scores of tanks and armoured personnel carriers arrived in Sihanoukville.

Military police spokesman Tito added that military police units from around the country had been moved to the capital in anticipation of a protest announced by “one political party”.

“If there is really a mass protest as one party has promised, we are afraid that violence will break out, so we want to protect [everyone] and not allow anyone to become a victim.”

Along with military police stationed around Phnom Penh, dozens of officers have been placed at the site of the former Renakse Hotel, a colonial-era building opposite the Royal Palace that has remained fenced off in recent years.

The 7,000-square-metre property, originally owned by the Cambodian People’s Party and seized by the government while on lease to the Renakse’s proprietor, was sold in 2008 to a private developer that was supposed to turn the city icon into government housing.

However, Min Khin, the minister of cults and religions, who allegedly arranged the sale of the hotel, said yesterday that the land remains in CPP hands.

A few of the officers stationed on the hotel grounds told the Post yesterday they had been sent to the capital from Mondulkiri and Kratie provinces.

Dressed in casual clothes, the men said they were “waiting” there to protect public order.

“Normally, our military police stay in their camp, but we have deployed them in some places just to protect public security,” Tito said, adding officers were routinely sent to areas deemed “insecure”.

Mao Rainny, deputy military police commander in Kratie province, said that he did not know how many officers had been withdrawn from his province.